GUELPH, Ontario – Grade 12 Canada and World Politics students at John F. Ross Collegiate Vocational Institute were given the task of identifying an issue of importance to them and creating a plan to do something about it for their culminating assignment.

The most important part of this assignment was following through with their plan and taking action. One project in particular caught the attention of the whole class.

Student Johann, who is of Filipino descent, tackled an issue that is very important to her – anti-Asian racism and the recent murder of the six Asian women in Atlanta – as the subject of her assignment. For her assignment, Johann surveyed Asian members of the John F. Ross CVI community about their experiences with racism.

After her survey, Johann created a painting depicting racist phrases that she heard from participants during her survey. In the centre of Johann’s painting is an Asian woman wearing a mask that reads, “hate is the virus.” In her attempts to address the fact that discrimination and attacks on Asians have increased, she posted her powerful artwork to Instagram with information for people to combat anti-Asian hate.

Some of Johann’s words on social media include, “Just like COVID, hate is a virus. Discrimination, racist attacks, and xenophobia on Asians have suddenly increased. But don’t ever think that this is a new issue just because the hashtag is trending. While sharing and reposting news on social media is great, we must get comfortable with starting conversations with one another. I made this painting to include the first-hand experiences of our peers on discrimination and racism. Let’s support each other, no matter the colour of our skin or ethnic background. Let’s get comfortable speaking up about our experiences. Let’s start talking.”

Let’s keep Johann’s conversation going. To learn more about continuing this conversation, visit the board website. 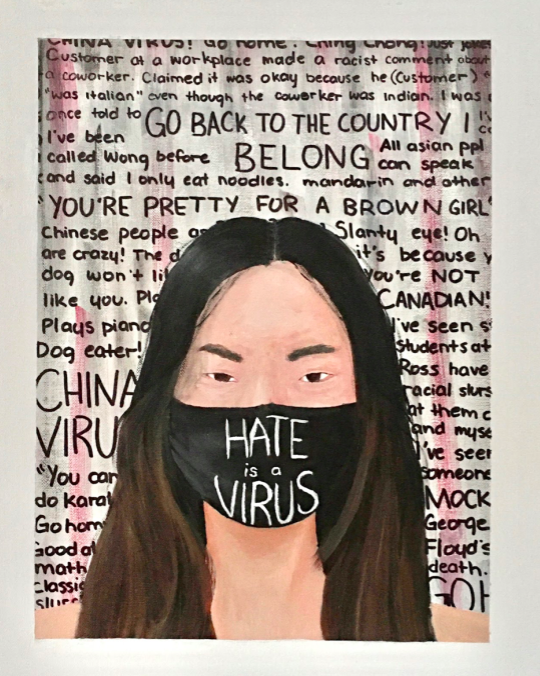