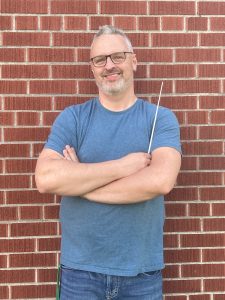 Dan Austin has been teaching instrumental music for 22 years, and is currently the Band Director and Instrumental Music Teacher at GCVI in Guelph. In 2022. Dan was awarded the I. Keith Mann Outstanding Band Directors Award by Musicfest Canada and the Nationals Arts Centre (https://musicfest.ca/awards-scholarships/i-keith-mann/) and in 2020 he was named the inaugural winner of the Beckwith Award by the Canadian Music Centre. (https://on.cmccanada.org/ba-dan-austin/) He was also recently named the new Concert Band Director at the prestigious Interprovincial Music Camp of Canada; IMC (https://www.campimc.ca/faculty/dan-austin/)

Outside of school, Dan keeps an active schedule as a vocal and instrumental performer with a variety of groups across Southern Ontario, as well as being a husband, and a father to two amazing children. Dan has been Treasurer for the Peel Intermediate Music Teacher’s Association, President and founder of the Upper Grand Elementary Music Teachers Association, Vice President of Youth In Harmony for the Ontario District, Education Coordinator for the International award winning Ontario Youth A Cappella Chorus and is currently the Western Ontario Representative and Membership Director for the Ontario Band Association. Dan is a member of the Harbourtown Sound A Cappella Men’s Chorus, The After Party a cappella quartet and released his first solo jazz album as a bass player in 2017. 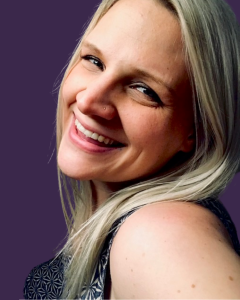 Lane Osborne is an experienced educator and vocalist who has been teaching music in the public education system for over ten years. After singing for David Davis during his time as Artistic Director of the Hamilton Children’s Choir, Lane was inspired to pursue a Bachelor of Arts in Music from the University of Windsor, a Master of Arts from McMaster University, a Bachelor of Education from OISE University of Toronto, and she was recently granted admission to the University of Michigan for a Doctor of Philosophy in Music Education. Always striving to be a better musician through the pursuit of higher education, Lane has been the recipient of the Social Sciences and Humanities Research Council of Canada (SSHRC) grant for her research on the Motown music empire and her choral dedication has received first class standing in the CBC Choral Competition (CBC Radio 2 Le Mondial Chorale).

In her time as an educator, Lane has taught and adjudicated auditions for the Peel District School Board’s Regional Arts Program and she is currently on faculty at the Guelph Collegiate Vocational Institute where she teaches vocal music, musical theatre, guitar and the Upper Grand District School Board’s interdisciplinary arts program, MADE Urban Arts. As director of the GCVI Chamber Choir, Lane’s ensembles regularly progress to Musicfest Canada Nationals, the Ontario Music Festival Association (OMFA) provincial finals, and have performed at Carnegie Hall, the Harrogate International Youth Festival (HIYF), Classic Albums Live and on stage with rock band Foreigner for dates on their 40th Anniversary Tour. Lane is currently the supporting conductor of the Esprimas group of the Hamilton Children’s Choir. https://hamiltonchildrenschoir.com/our-team/