Here is a look back at some of the amazing events that have taken place at Norwell from September until now.

On September 26th, Norwell District Secondary School organized the Terry Fox School Run event. The leadership class took on the project with enthusiasm and the event ran without a hitch. With a goal of  $1,600, the school managed to raise $1,488.50. A competition was put in place against the “feeders school” in our area– Palmerston Public School, Minto Clifford Public school, and Centre Peel Public school– as to whoever  donated the most amount of money per person.

Joanna Cashin from the leadership class, says “It was a really fun event to plan. With lots of hard work and dedication we managed to run the event without a hitch.”  Norwells students participated in the event, running or walking for cancer research in Terry’s name.

Sava Pavel, also from the leadership class says “It was a great experience to see how much Terry Fox has affected people.” As the Norwell students put all their heart into this work, the outcome was a success. They started their run on Whites Road, progressing down Whites Road Trail,and into downtown Palmerston.

Before the runners and walkers left there was a video played for students and staff of people who either had cancer or had been touched by cancer in our community. The interviewees included Glynis Belec, Erica Klaassen and Karen Prior Cashin. This video helped inspire students to run and raise money, and to help such a great cause.

Shayna Morphy says “Terry Fox has such an important message. He gives hope to those of us that need it and inspires people to be the best they can be.” The school raised funds with Toonies for Terry with a goal of $1600 and the incentive to shave the School Police Officers head. The school did not end up achieving the goal, but still raised a phenomenal amount of money to go towards an amazing cause, The Terry Fox Foundation.

With that in mind, Norwell plans to continue with the tradition of Terry Fox, next year, and many more years to come. 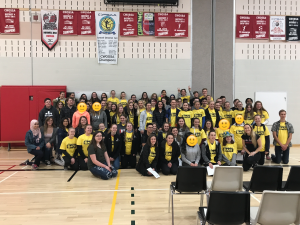 Eighty-six eager participants, forty three daring teams, seventeen hardworking volunteers, ten grueling challenges, eight generous sponsors, and one incredible guest speaker! The fourth annual Amazing Race Norwell Edition took place in downtown Palmerston on Tuesday October 15th, 2019. Norwell students attended a kick off assembly led by Olympian, Amazing Race finalist and founder of the Believe Initiative, Sarah Wells.  Sarah’s inspiring message was to ‘Get Back Up’.  She then started the Amazing race allowing the participants to find their clue, and set off for the race of a lifetime.

The Amazing Race was a great opportunity for students to get some exercise, work with local businesses, test their skills, and be pushed to their absolute limits. Nothing would have been possible without the help of The Amazing Race sponsors.  A big thank you goes out to the Minto Youth Action Council, Mapleton Township, Minto Arts Council, Broker Karen Flewwelling, OSIM Interactive, Minto Dance Academy, the Palmerston Lions Club, and the Palmerston Legion. 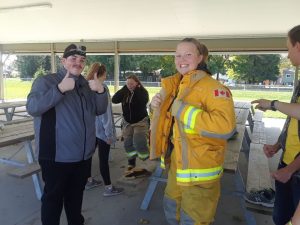 The demanding challenges were hosted by the Norgan Theatre, Lawrence Park, the Wellington County Library, Home Hardware, the Railway Museum, Canada Post, Kulfi Cafe, CIBC bank and at the CNR park with the help of the Minto Fire Department.

“It was super fun and a good opportunity to hang out with friends that have different classes and discover Palmerston. The challenges were unique and something you wouldn’t normally get to do,” stated Braydon Prevost, Amazing Race finalist.

The race concluded at 3 pm with all teams accounted for.  The undisputable winners of the Amazing Race were Team #21, Adam Chittick and Bailey Drost.  The team won two tickets to The Old Post escape room in Harriston. The top five finalists received care packages donated by the Minto Mental Health Association.

The directors of The Amazing Race look forward to new opportunities for next year’s event, “This year’s Amazing 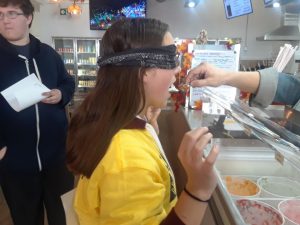 Race went really well. A lot of planning went into making this event possible, from ordering t-shirts to contacting businesses and promoting to teams. I am super excited for future Amazing Races to come.” -Brianna Flewwelling, Amazing Race director. 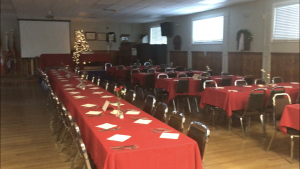 Community Christmas Dinner. The event was hosted at the Palmerston Legion on December 4th, 2019.

“We started planning in late October and started bringing in the food the week of Dec. 4th. We were in the kitchen at 8 am to cook everything to ensure it was delicious and hot,” stated Haley Richards, a volunteer for the Community Christmas Dinner.

There was a full house with over 140 people from our local communities including Palmerston, Drayton, Harriston, and Clifford attending the dinner. The doors opened at 5:15 and after the sponsors of the event were thanked and grace was said, dinner was served at 6pm.

“The food was delicious and felt like my grandma cooked it. It was only $5 and was for a good cause,” stated Ellyse Charleboise, a student who attended the event.

All of the food served at the dinner was donated by sponsors.  The dinner consisted of turkey from Golden Valley Farms, chicken from Farm Fresh Poultry, corn from Palmerston Foodland, dinner rolls fresh from Harriston Bakery, mashed potatoes from Downey Potato Farms and stuffing from Drayton Freshmart with gravy on the side from the Wholesale Club. Dessert consisted of cookies and cupcakes brought by volunteers and cake donated from Fresh Start Bakery in Palmerston.  Coffee and Hot Chocolate was donated by Harriston Tim Hortons, and the cranberry punch from Listowel Food Basics.  Centerpieces were donated by Blooms on Main in Drayton.