The End of An Era…

It is with mixed emotions that we say goodbye to the two founders of the RECAP program at Ross. As of July 1, 2020, Ms. Dale Hobbs and Mr. Tom Slater have retired!

While we will miss their leadership, guidance, talents, and friendship, we wish them all the best in the next chapter of their lives. They have left us with big shoes to fill, but with a foundation and reputation that is so strong in the Arts Education Community. They have entrusted us with an opportunity that we will endeavour to keep growing so that we can continue to offer an incredible Arts Education to our students.

Thank you Dale and Tom, for everything. 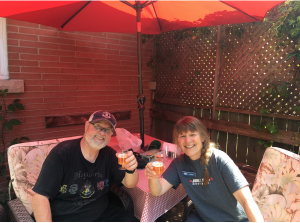 Ms. Hobbs has led our Music programme for many years. Not only did she have a degree from the University of Western Ontario in music, but she also brought her many years of professional experience as a performer, director, and producer into the classroom to share with her students.

Outside of school she continued to work as a professional performer as her career continued, but she also managed her own theatre which produced many high quality regional plays and musicals.

Her commitment to Ross and the music program was shown each and every year she has been here. If it wasn’t stellar music nights, it was the many, many gold certificates won at Kiwanis Festival. Her choirs and ensembles were the exemplar in the UGDSB. Her students appreciated her wonderful sense of humour as well as her dedication to pushing them to achieve at a higher level. She believes in the potential of every student.

Ms. Hobbs also was the Co-Head and Co-director of RECAP, our amazing Arts program. Under her leadership and guidance the department has flourished and continues to be an example of best practices.

It is with sadness that she is retiring and she will miss all the moments with the students and staff, but we will miss her too. We wish her all the best in her retirement and look forward to hear about all the fantastic new projects she will undoubtedly get involved with.

We’ll miss you Hobbsie! Thanks for the memories!

Mr. Slater has been a fixture here at John F. Ross for forty wonderful years. He began his theatrical life as an actor at the age of nine in Europe and has since been involved in professional and community theatre on stage, in movies and on television. Mr. Slater continues to write, direct, and publish plays, some of which have received recognition through The Educational Theatre Association, The National Theatre School and, representing Canada three times, have appeared on The International Thespian Festival’s Mainstage.

In addition to sharing his wealth of experience through directing and advising his own student directors at John F. Ross, Mr. Slater could be found in E.L. Fox Auditorium, overseeing his avid students in both acting and technical theatre classes, which ran all school and community events in the theatre. Each year, he took his highly successful school productions to The Sears Drama Festival Competition and brought back to Ross numerous district, regional, and provincial awards and accolades. Mr. Slater’s productions, which included student actors and technicians, toured schools and communities across Ontario, exploring issues relevant to high school students.

His commitment to the school went beyond the Arts. Mr. Slater coached football in the 80’s and, after a 30 year hiatus, he returned as Offensive Line Coach to win another District 10 Championship in 2020!

Mr. Slater is the Co-founder of the Ross Educational Creative Arts Program (RECAP) and he has spent much time promoting the Arts at Ross in this capacity and as Co-head of The Arts Department. Always ready to support the dreams and aspirations of his students, they will remember their beloved Mr. Slater for his mentorship, his expertise, his sense of humour, his caring nature, and his advocacy of the Arts.

Thanks, Slater! We’ll miss you and we wish you good luck in the next Act as you ‘exit stage left’!