Great news from WHSS athletes at the International Special Olympics. We have 2 athletes out of 2000 and they both are bringing home medals and HUGE smiles because of the experiences they’ve had including going to Ripley Aquarium, living in a university dorm, riding the subway and meeting lots of interesting people.

Thomas Ryan – gold in the 100m and Alec Elliott gold in the long jump. WHSS is so proud of them!! 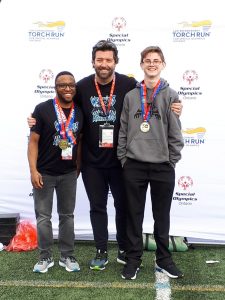 MOUNT FOREST — More than 2,000 athletes ranging from 13 to 21 years of age participated in the Special Olympics 50th anniversary 2019 Invitational Youth Games from May 14 to 17. Of those athletes who arrived in Toronto from across Canada, the United States and the Caribbean, two gold medal winners hailed from Wellington Heights Secondary School in Mount Forest.

Thomas “TJ” Ryan won the gold in the 100-metre dash, finishing in 14.81 seconds, and Alec Elliott took home the gold in running long jump with 3.49 metres.

“It was almost like a roller-coaster in a sense because it was a pretty close call,” Ryan said about his gold medal run in the 100-metre dash. “It was a photo finish. I’m pretty sure I only beat him by a millisecond, so it was pretty exciting.”

Although Ryan said he trained a lot, Elliott said he won the running long jump by practising for only about five minutes.

Ryan and Elliott had many perks thrown into their three-day stay at a residence on the University of Toronto campus. They visited Ripley’s Aquarium and the Eaton Centre, went to a dance and rode the subway, which they both said was no big deal.

“I took way too many subways back in my day,” Ryan said.

Competitors also had numerous health perks offered to them, such as a free physical and physio therapy, and new eyeglasses.

When asked what their favourite moments of the event were, Ryan said it was being on TV, while Elliott said he was amused when the crowd booed Premier Doug Ford.

Ben McCabe, the special education head at Wellington Heights, took on the responsibility of training Ryan and Elliott, driving them to the games and chaperoning them around Toronto — all which McCabe said he was happy to do.

“They were fantastic,” he said. “They did a great job and really made the school proud.”

McCabe said the power of their achievement was apparent when they returned to the school and the entire student body and staff were there to greet them.

“These kinds of events just show how powerful inclusion can be and how sports and extracurriculars are important to students at the school,” he said. “It just brought the whole student community together, which was really amazing.”