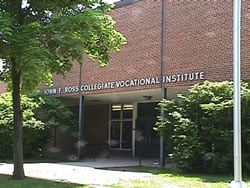 Originally called John F. Ross Vocational School in honour of John Francis Ross, a highly respected Guelph educator and principal, the school opened its doors in 1956 to 460 students, 25 teachers, and Lorne Fox as its principal, under its new name John F. Ross Collegiate and Vocational Institute.

John F. Ross C.V.I., with the highest enrollment in the board, in part due to its comprehensive ESL and French Immersion programs, attracting students throughout the city of Guelph, as well as Eramosa and Rockwood, has become recognized for its academic excellence, its athletic programs, and its co-curricular clubs.  Today’s technology plays an important role in the education of John F. Ross C.V.I. students. Our library includes 16 computer workstations with Internet and CD-Rom access. There are also 6 full computer labs and numerous other computers for use within the classroom. Our guidance office also has its own computer lab which is dedicated to assisting students search for career related information.  A central meeting place in the school is E.L. Fox Auditorium, which is used for school assemblies and dramatic performances.  It also serves as a link to our school community as various community organizations utilize it for events.  With its combination of academics, extracurricular activities, and diverse student population, John F. Ross C.V.I. truly recognizes and affirms the growth of the whole person.