Due to the COVID-19 pandemic all UGDSB schools will remain closed for the rest of the 2019-20 school year. All UGDSB buildings and grounds are closed to the public. Please click the links below for information on COVID-19 and distance learning. 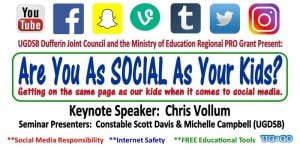 Wellington-Dufferin-Guelph Public Health is developing a plan for how to get children in grade 7 the second dose of their vaccine series as soon as it is safe to do so.

All publicly funded schools in Ontario will remain closed until at least May 31, 2020, as part of an effort to keep students, staff and families safe from COVID-19.

Learning at Home: Setting students up for success

To support families, the Upper Grand District School Board has put together some helpful tips for parents/guardians to set their child up for success.

The Upper Grand District School Board has launched a website for parents/guardians with resources and information to support students with special education needs.