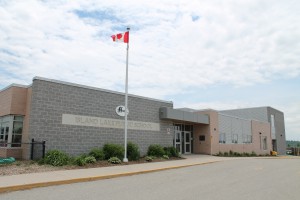 History: School formed September 2002, shared space at the Orangeville Holding School with Montgomery Village students (400) until they moved into their new school by Westside Secondary School and immediately began sharing school with Princess Margaret PS January 2003 while Princess Margaret students (400) wait for their new school to be built (it is scheduled to be completed in May 2004.) School originally referred to as PH 9/10 PS until it was officially named as Island Lake Public School in the spring 2003.