GUELPH, Ontario – Staff and students across the Upper Grand District School Board have pledged to make changes in their lives that will help the environment.

At the outset of the new year, Upper Grand was issued a challenge – think about the environmental issue that concerns you the most, and take action to do something about it.

Hundreds of Eco Resolutions poured in, with many critical topics that were pledged.

Examples of resolutions include decreasing the use of single-use plastics (like plastic bags, bottles and cutlery), reducing the amount of compostable paper towels that end up in the garbage, and encouraging carpooling when travelling to schools and community meetings.

The UGDSB’s Environmental Education and Management Committee chose a few select winners, a difficult task given the quality of the submissions. The ones that really stood out were not only action oriented, but also empowered others to act as well.

In the elementary student category, Madison, a grade 8 student at John Black PS, and Cynthia, a grade 6 student at Arbour Vista PS, tied for first place.

Madison believes that we use too many electronics that all too quickly end up in a landfill. To resolve this problem she pledges to host an e-waste collection campaign for the entire school community, so devices collected will be sent to an organization to be reused or valuable parts reclaimed for recycling. 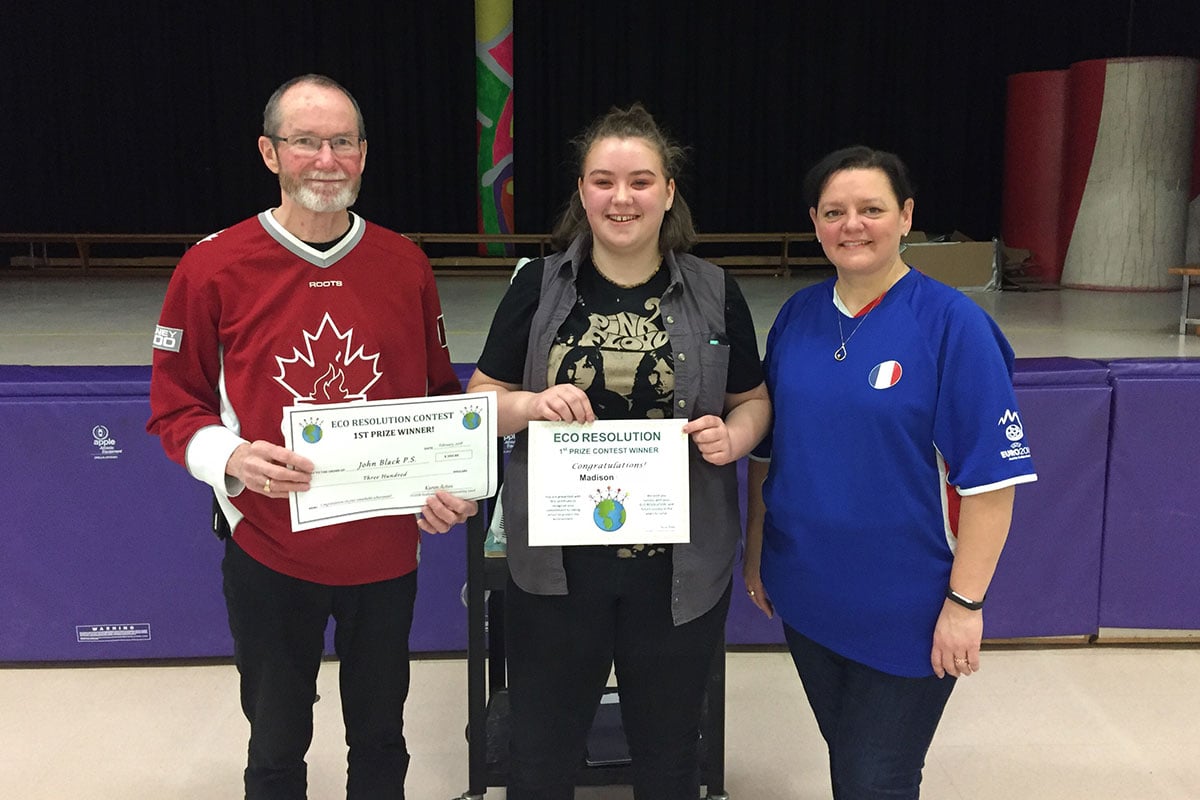 Cynthia main concern is about the effects of warming on the glaciers due to climate change, which will cause flooding, destroying cities and animal habitats. She pledges to work toward reducing the amount of fossil fuels used by the trucks collecting garbage at her school by reducing waste, encouraging proper recycling and starting a composting program. 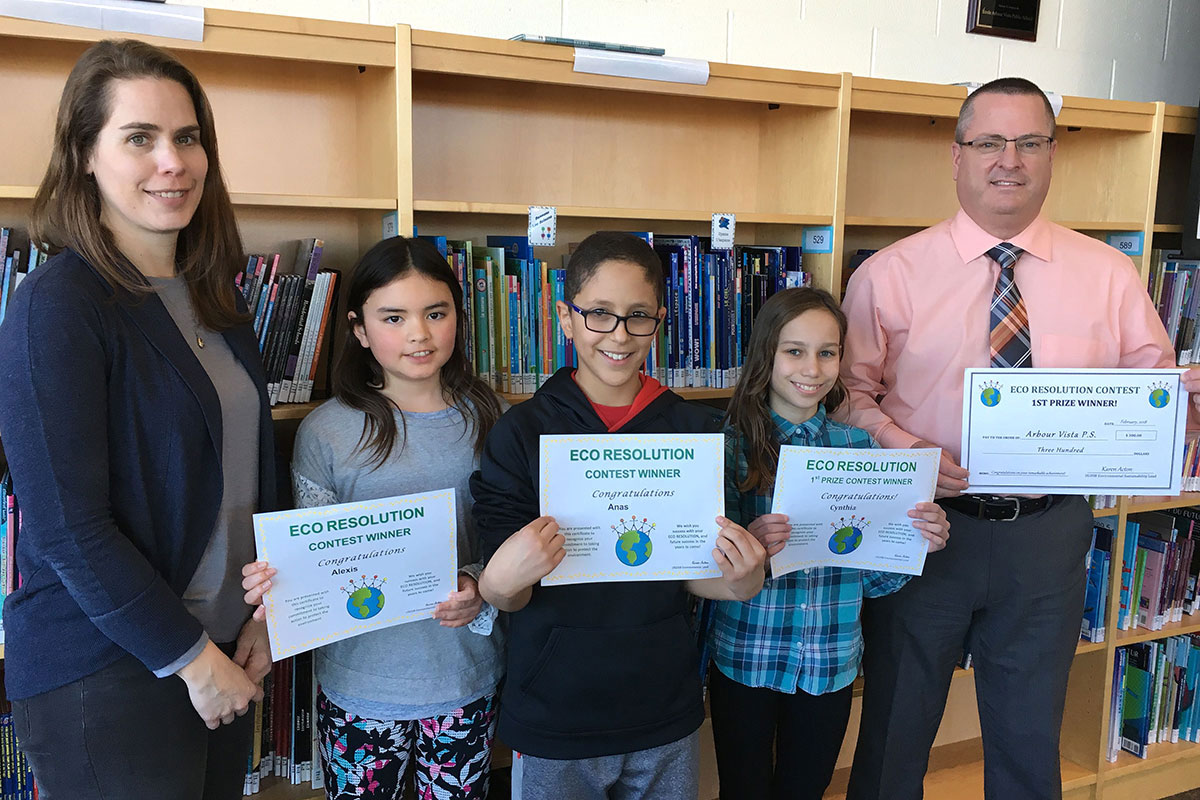 Taking first prize in the secondary student category is Gillian, who is in grade 12 at Centennial CVI. Gillian believes the biggest issue facing the planet is climate change. She pledges to not only increase her Eco Actions at school but also increase her community involvement (such as with Ontario Nature and Nature Guelph). She will seek to raise awareness of issues caused by global warming, such as the alarming problem of the declining bee population. Gillian plans to continue her efforts after high school by studying environmental science and sharing her knowledge with others. 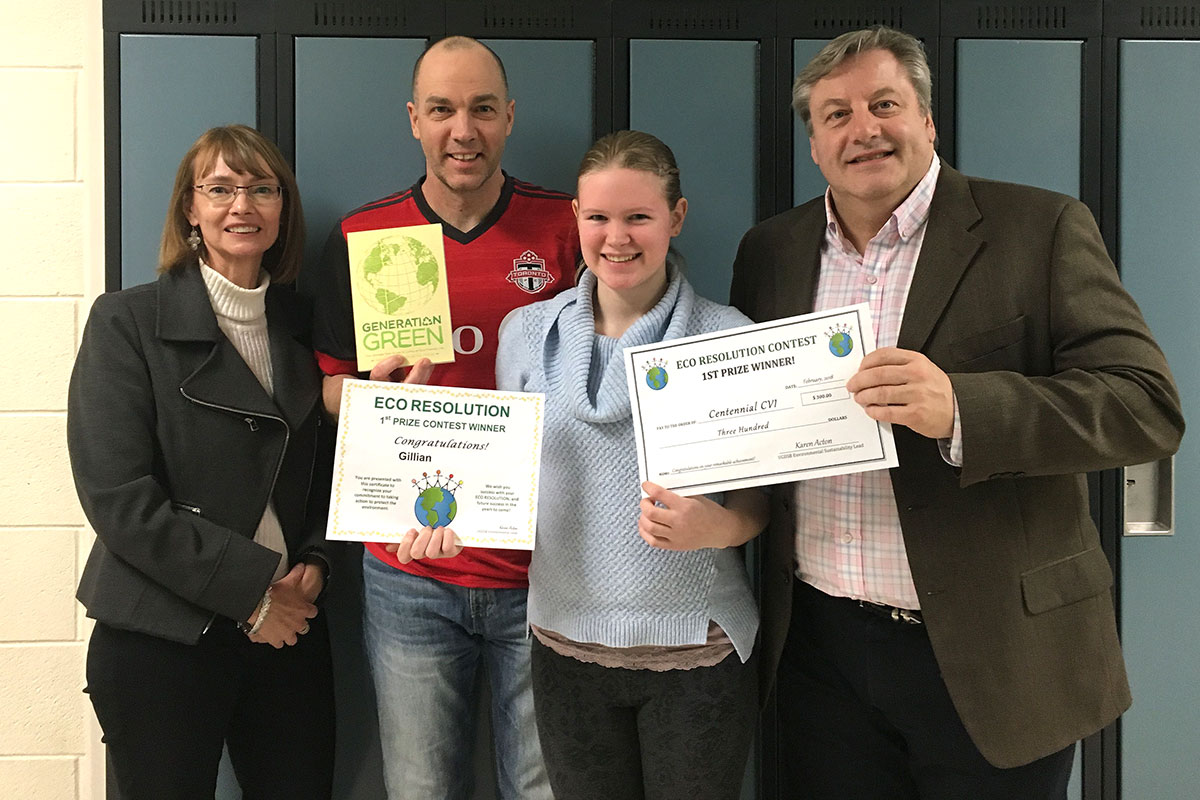 In the staff category, Ms. Chisholm-Davis at Centre Dufferin DHS, Ms. Firth at Parkinson Centennial PS and Ms. Alies at the Guelph Board Office won first prize for their resolutions.

Ms. Chisholm-Davis believes that food ending up in our landfills is a global concern. Her resolution is to promote an enhanced composting program at her school by adding bins in more areas and motivating more people to participate. Her class will create posters, write morning announcements, and send a letter to all staff, educating them about the ecological and economical benefits of organics recycling and asking for their support in this important initiative.

Ms. Firth, with the support of her class, pledges to clean up the Parkinson Forest and make it an inviting place where wildlife will return. Actions include planting trees, picking up garbage and educating the local community by making announcements and posters. Even better, people might begin to be motivated to clean up other areas, and the idea will spread.

Ms. Alies’ Eco Resolution is to reduce paper waste, with the aid of technology. She, with the help of colleagues, is working to reduce paper consumption significantly by using shared Google task lists, shared calendars, electronic agendas, e-documents, and e-filing.  She resolves to no longer print anything unless it is a must and will encourage others to email her documents so that she can control the choice to print.

Congratulations to the winners and everyone who participated!