8 teachers, including 2 from UGDSB, awarded Governor General’s History Award for Excellence in Teaching

OTTAWA, Ontario – For their exceptional commitment to sharing Canadian history in unique ways, eight teachers from across the country have received the Governor General’s History Award for Excellence in Teaching, presented in Rideau Hall today by Her Excellency the Right Honourable Julie Payette, Governor General of Canada. This award recognizes teachers who have distinguished themselves through innovative projects that allowed their students to explore Canadian history from a new angle.

“With this award, we celebrate the extraordinary work of teachers who outdo themselves every day to shape our adults of tomorrow. Knowledge of our history is a fundamental element of this education. The winners certainly have a significant influence on their students, enabling them to understand their history through unique and innovative projects,” states Janet Walker, President and CEO of Canada’s History.

The winners of the Governor General’s History Award for Excellence in Teaching are:

Marc Mailhot and Lynda Brown developed a cross-curricular and experiential project called GrandPals, in which students explored their personal histories in addition to working with community seniors. In so doing, students discovered key events in Canadian history while building invaluable intergenerational bonds. 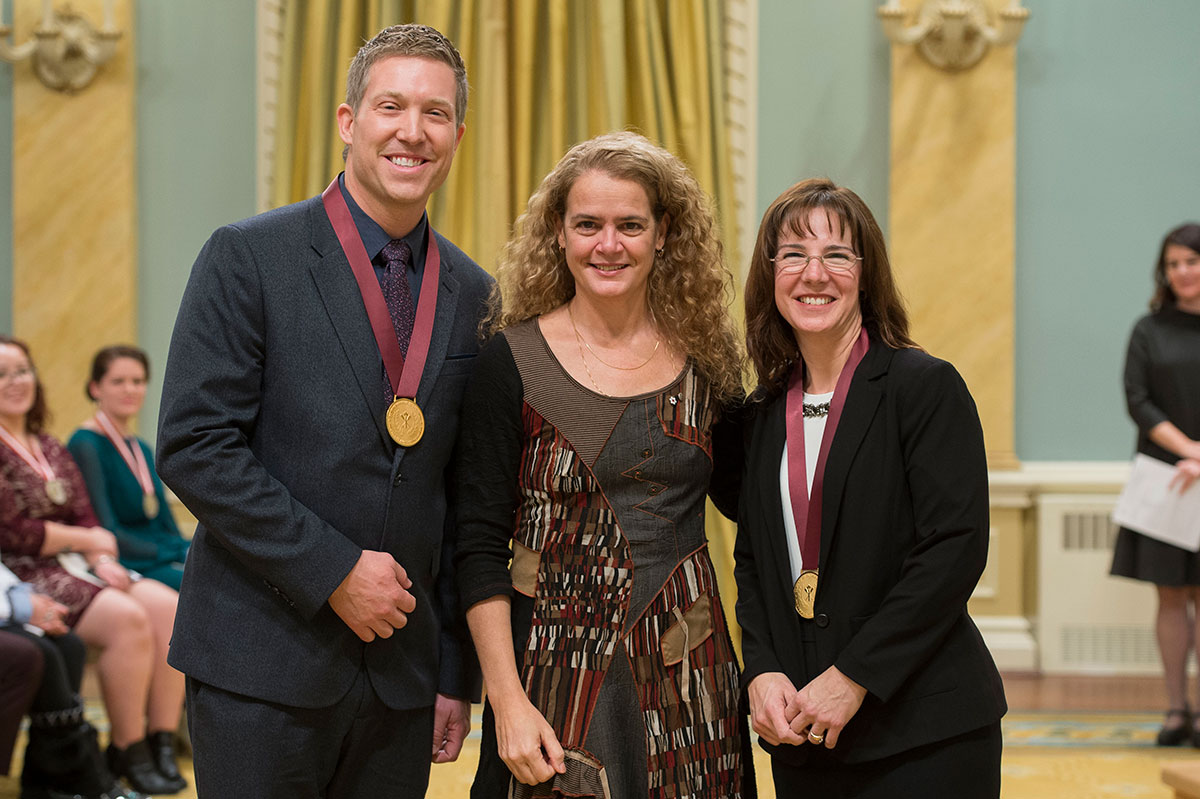 Armand Doucet’s students took part in the Passion Project, which encouraged them to make connections between their personal interests and the study of history. Mr. Doucet leveraged this project to diversify student engagement and assessment, while building their interest and kindling their passion for history.

Inspired by the celebration of the 150th anniversary of Canadian Confederation, Janet Ruest encouraged her students to go beyond the textbook to explore lesser-known stories that were meaningful to them. In conducting interviews and holding a public exhibition, the students were able to synthesize their knowledge in a stimulating project, while contributing their own stories to the broader narrative of Canada’s history.

Rob Flosman and his students established the student-run Waterdown Museum of History, which has an annual attendance of over 1,000 visitors. Through this innovative project, Mr. Flosman has created a community that embraces the entire Canadian history program and extends it beyond the confines of the classroom.

The Treaty4Project enabled Naomi Fortier-Fréçon and Leia Laing’s students to understand their generation’s ties to Treaty 4 (signed in 1874 at Fort Qu’Appelle, Saskatchewan, Treaty 4 ceded indigenous territory to the federal government). Through the participation of a wide range of stakeholders, the project—presented in several Regina Public Schools and Conseil des écoles fransaskoises schools—gave students an opportunity to explore the concept of reconciliation by engaging with members of their community. It also allowed them to acquire fundamental knowledge of history.

In the Skookum Stories project, Glen Thielmann’s students were tasked to create captivating stories inspired by their own histories and cultures. They were encouraged to explore an aspect of their histories and to further investigate it by applying the concepts of historical thinking. Through this project, the teacher helped his students foster intergenerational relationships and uncover diverse histories.

“Congratulations to this year’s award winners of the Governor General’s History Award for Excellence in Teaching”, says Andrea Barrack, VP Community Relations and Corporate Citizenship. “At TD, we understand the instrumental role teachers play in shaping the future of our country. Awards like Excellence in Teaching make it possible for us to continually celebrate educators who go above and beyond every day to creatively engage students in learning about Canada’s remarkable history.”

Each award comes with a $2,500 prize for the winner, as well as a $1,000 prize for the teacher’s school. This award is administered by Canada’s History, with support from TD Bank and EF Educational Tours.

About the Governor General’s History Awards

The Governor General’s History Awards were established in 1996 to recognize excellence in teaching Canadian history. In partnership with Canada’s leading national history organizations—including the Canadian Historical Association, the Canadian Museums Association, Historica Canada, and Experiences Canada—, Canada’s History has worked to expand the awards to recognize the many different ways history is taught, communicated, and celebrated by Canadians. The Governor General’s History Awards now provide an annual opportunity to bring together students, teachers, historians, museums, community organizations, writers, and media producers to celebrate Canadian history and to learn from one another.

Canada’s History is a national charitable organization whose mission is to promote greater popular interest in Canadian history, principally through its publishing, education, and recognition programs. In addition to administering the Governor General’s History Awards and publishing Canada’s History magazine (formerly The Beaver) and Kayak: Canada’s History Magazine for Kids, Canada’s History produces a number of educational and online programs to further encourage the exploration and understanding of our shared culture and history.