The Upper Grand District School Board covers the ancestral and treaty lands of the Mississaugas of the Credit, the Six Nations of the Grand River, and Saugeen Ojibway Nation.

Please click the links below to visit the websites of the UGDSB’s Treaty Partners: 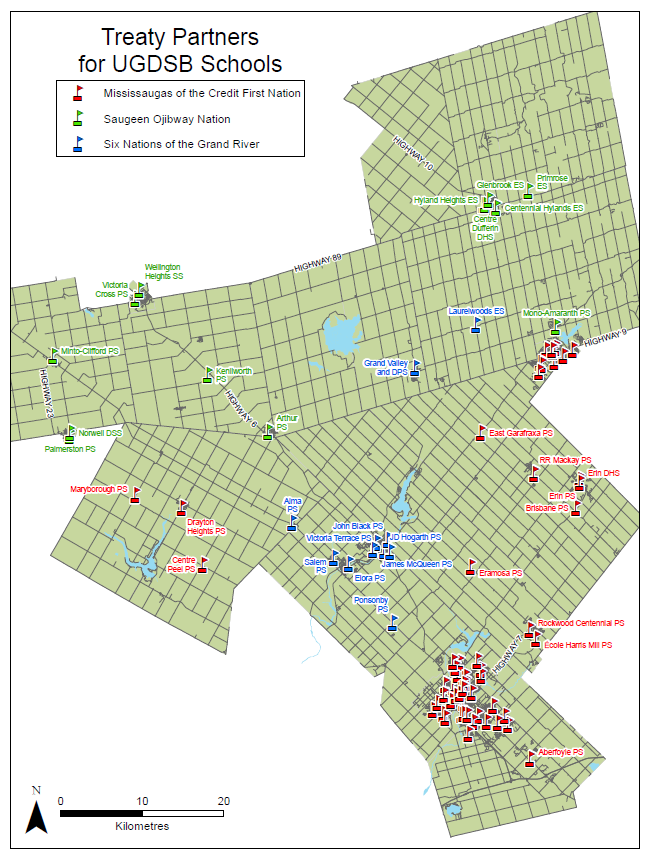 Canada has entered into a period of reconciliation. The federal government’s December 2015 Truth and Reconciliation Commission report included 94 calls to action to further reconciliation between Indigenous and non-Indigenous peoples.

Part of the Truth and Reconciliation calls to action include respecting and honouring the treaties and nation-to-nation relationships. To that end, the board’s First Nation, Métis and Inuit Education Council, together with local communities, drafted this territorial acknowledgement:

From the Anishinaabe to the Haudenosaunee and the Métis, these treaty lands are steeped in rich Indigenous history and modern traditions. As a community, we have the responsibility to honour and respect the four directions, land, waters, plants, animals and ancestors. Today, this area is home to many Indigenous peoples from across Turtle Island. We acknowledge the Mississaugas of the Credit First Nation of the Anishinaabek Peoples, on whose ancestral and treaty lands we teach, learn and live.